The sweater has been deconstructed, rolled into center pull balls, and the Tin Can Knits Flax Sweater (http://tincanknits.com/pattern-SC-flax.html) has been cast on. It’s a top down, raglan style sweater, and I have, of course, made some mistakes. The collar, which is a 1×1 rib pattern, worked well, and I didn’t make any errors during that portion. I did make some videos, but they are terrible, so I may or may not post them on YouTube and link them.

I used a long tail cast on, because necks need to be stretchy, the better to fit my fat head through! I hate trying to estimate how much yarn I need for the long tail method, though, and have had to pull off the cast on and start over more times than I’d like to count, with numerous projects, so I looked for a method for estimating. I found a great page with several different methods of estimating yarn needs. https://knitfarious.com/knitting-101-how-much-yarn-for-long-tail-cast-on/ I ended up using the “Two Strand Cast On” technique, as described on the referenced page. It was easy, worked well, and I remembered to remove the extra stitch! So that was great! I switched to the next size up needle, which was supposed to be a 36″ size 8. For some reason, I had set aside needles for this project (I thought!) and so I swapped up to the bigger one. Which was a 24″ size 7. Which I knew was too short, but I didn’t have a longer one and wanted to keep working on the sweater while I was confined to bed. However, I didn’t realize it was a 7, and not an 8. Oops. I ordered a 36″ size 8 (thanks Amazon!) and continued to work on the sweater. With the size 7’s. I got all my number of stitch increases figured out by using this calculator https://www.worldknits.com/knitting-calculators. In the past, I’ve tasked my husband with figuring out how many stitches and where to increase, and I know how, (in theory!) to do the math, but it sure is a lot easier to use a calculator and then just follow the instructions! And actually follow the instructions. Because I was watching something, Treme, I think, and wasn’t paying attention, and instead of M1, I was KFB. That didn’t work out so well. I had to un-KFB, and unknit the entire round, because guess what? KFB does not give you as many stitches as M1 increases. Not smart on my part. But a cautionary tale to all those increasing out there! If you’re following a sweater pattern, and you use the increase calculator, actually follow the instructions!

A few days later, after I made an obligatory error in the garter stitch panel on one of the shoulders, and decided that I just didn’t care, because it will match my other sweater, (a Flax Lite that I knitted several years ago!). When I finally reached the end of the raglan rows, I realized that, even with the 8 extra rows afterward, my measurement was nowhere NEAR the length it should have been. This is just about exactly when I realized that I was using the wrong size needle, because the 8’s came via UPS, I was getting ready to swap them out, so I ended up knitting probably 20 more rows, until it reached the recommended length for the pattern. This may look really ugly and weird when I put the arms on. This might be an “A-shaped” sweater. It may also be too small. AARGH. Another interesting side effect of the needle size change is that the pattern of the self striping yarn changed dramatically, from short chunks of color to large blocks of color. So that’s weird and possibly really ugly…I decided to just carry on, and if it doesn’t fit me, I’ll give it to my kid. So…then I swapped needles, put the sleeve stitches on waste yarn, and cast on 8 stitches at each underarm space, using the Backward Loop Cast On Method. (This is described in the Flax pattern, and on the Tin Can Knits blog, where they have lessons to knit this very sweater! https://blog.tincanknits.com/2013/10/25/lets-knit-a-sweater/. So, the sweater is separated, made into a sweater yoke shape, and now it’s a matter of knitting about 5000 miles of knit stitch in the round, until the sweater body is long enough to cover my belly. So, this is where we are today.

About The Kestrel Nest 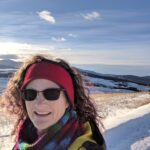 I’m Cinder. A maker, creator, artist, learner. Join me in the journey.